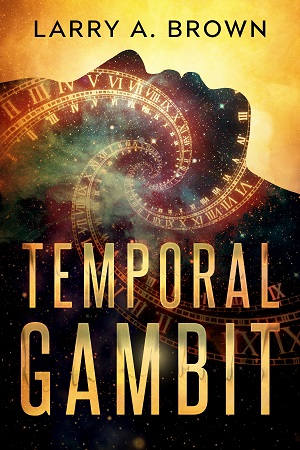 One small change in the past. Can he undo the damage to save his future?

Martin joined the secret Chronos Project to research some of history’s intriguing mysteries. At first, his journeys through time go smoothly. Then something goes wrong.

When an alien race tampers with earth history, their interference ripples through time. Martin no longer recognizes his present. He must travel to the ancient past to save his planet. But he’s just a history professor playing a game without rules.

Can Martin counter his opponents’ moves before they eliminate the world he knows?

If you like time travel, alternate reality, and adventure, you’ll enjoy Larry A. Brown’s Temporal Gambit. To find out who wins, get your copy today!

“How long has he been back?”

“A little over an hour. Don’t worry; it looks like he’s starting to wake up.”

Martin heard voices around him. Familiar voices. His eyes fluttered open and squinted at the overhead light. He tried to focus on the shadowy figures hovering over him. “How long?” His throat was dry, his voice raspy.

“You’ve been gone about twelve hours in both your subjective time in the past and in present time,” the blurry face above him said. “This corresponds to our calculations for when the temporal distortion wave would collapse. So we’re quite pleased with the data for the initial jump.”

“Welcome back, Martin. You’ve just traveled almost two hundred years and look none the worse for wear.” The speaker wore a stethoscope around his neck. “How do you feel?”

“Groggy … a bit hard to concentrate,” he responded, rubbing his forehead. “But no pain. I can’t remember what happened, though.”

“That’s to be expected. The effect of the stabilizing meds should wear off soon. This is why we insisted on using the cyber-chip to record your thoughts during the trip.”

Martin found himself in a long, cylindrical tank half filled with a warm liquid. The hinged lid to the device lay off to one side at an angle. He was wearing a skin-tight outfit much like a scuba-diving suit but made of an iridescent material that shimmered in a rainbow of colors under the lights. It covered his entire body, including his head, leaving only his hands and face bare.

Gripping the sides of the tank, Martin pulled himself upright.

“Dracula rises from his coffin. Quick, where’s the garlic?” That snide comment came from David Barton, the resident smart aleck, sitting at his computer. David’s ability to interject sarcasm into almost any situation was matched only by his expert programming skills.

Next to him were John Rey Bautista and Rosa Santos, the Chronos Project’s theoretical physicists. They had joined the team after leaving top-secret work with the military. Both were Filipino, although their families had lived in the United States for several generations. They were a likable and cute couple, even though they had the annoying habit of conversing privately in Tagalog, which no one else in the group understood.

Dr. S.P. Hewes was the team’s physician, responsible for the well-being of everyone but especially the time jumper. He had practiced medicine at the Mayo Clinic and Johns Hopkins for three decades before accepting his current position.

Finally, standing off in the corner was Andrea Carlton. She served as the official observer for the project’s anonymous sponsor, reporting back on progress and overseeing the finances. Skeptical by nature, she had doubts about the entire business of time travel.

Glancing around the room, Martin felt grateful to work with this team of specialists. The Chronos Project had recruited the best of the best, which wasn’t hard when you had a mysterious patron with seemingly unlimited resources.

S.P. helped Martin climb out of the pod, and Rosa handed him a towel to dry off. The liquid dripping on the floor made a slippery mess, but it was necessary to induce the state of sensory deprivation for the person inside the pod. Once the lid was sealed, all light and sound were eliminated, and the salt water solution created the feeling of weightlessness.

Why this experience was needed for time travel, Martin did not understand, but he trusted that his colleagues knew what they were doing. He left science to the experts while they left history to him — an equitable arrangement, in his opinion.

Andrea spoke up for the first time. “Very well. If you’re ready, why don’t we download your personal log to determine if this huge financial gamble has paid off?”

Martin deposited the wet towel in the nearby hamper and made his way to the chair at the computer. David gave him a round electrode pad with a wire running from it, which he attached to the spot below his left ear where the cyber-chip had been implanted under the skin. The team all turned to the large monitor on the wall and watched as it began transcribing the log.