The Story of Israel

KING SOLOMON AND THE TEMPLE

When David was old, he slept with a young woman to keep him warm. For people in those days, the king’s ability to lead was often measured by his virility. The court wanted to see if David would have sex with the woman, but he did not. Taking advantage of his father’s weakness, Adonijah tried to take the throne. David’s commander Joab joined Adonijah, but Nathan the prophet and Zadok the priest remained loyal. Bathsheba wanted to see her own son Solomon on the throne and persuaded David to declare him the next king. Solomon rode into Jerusalem on David’s mule; although a common animal today, mules were considered rare in this time. In the New Testament Jesus followed this symbolic example when he rode into Jerusalem for the last time as the ultimate king of the Jews.

Adonijah sought protection at the altar, and Solomon said that he would be spared if he is worthy. However, Adonijah later desired to take David’s concubine, a sign that he wanted to challenge Solomon for the throne (recall how Absalom slept with his father’s concubines). Solomon has his half-brother killed, along with Joab who betrayed David. Solomon appointed Zadok as high priest and his descendants served Israel for many centuries, replacing the family of Eli as God had promised (1 Samuel 2:27).

Granting his request, God gave Solomon great wisdom, but unfortunately he did not always use it. Later in life he married many foreign women, mostly for political reasons, and they lured him and the people into idolatry. However, in ch. 3 we have a famous example of Solomon’s wisdom in the story of the two women fighting over a child. He knew that the true mother would give up her child rather than see him killed.

Because David was a warrior, God did not allow him to build the temple (1 Chron 28:3) but left that task to Solomon, which occupied the first 20 years of his reign. It was completed in the 10th century, perhaps 960 BC. Below you see an artist’s guesswork at what the temple might have looked like, although nothing remains of it today. The temple resembled the tabernacle before it but was a permanent structure made of the finest materials. The general layout of the temple followed the design of many Canaanite temples of the day which have been discovered by archaeologists so we have a rough idea of its construction.

Like the tabernacle, the temple was not a place of congregational worship like a church building where people gather. Only priests could enter the temple itself. Inside the temple was the Most Holy Place or Holy of Holies where the Ark of the Covenant rested. Only the high priest could enter this room once a year on the Day of Atonement. 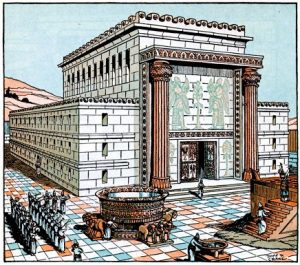 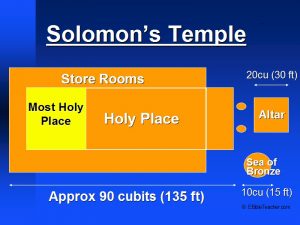 Here is a link to an excellent video of an artist’s conception of the temple as described in 1 Kings 6. Notice the artist imagines a strong Egyptian influence on the art of the temple, but nothing in the Bible suggests this.

Today in Jerusalem, the Muslim Dome of the Rock (built 691 AD) sits where the temple probably stood. One archaeologist believes that we can still see the place where the Ark of the Covenant sat. In the picture of the rock below, look for the small rectangle in shadow in the upper right corner of the rock. There is no way to prove this, but it’s an intriguing possibility. 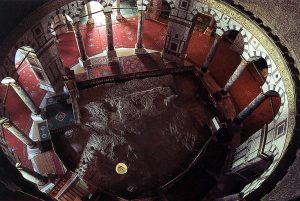 Below you can see the entire temple mount as it looks today. Muslims believe that Mohammad was taken up to heaven in a vision from this place. Thus Jerusalem is a sacred location for Jews, Christians, and Muslims today. (For more information about Islam and some connections to the Bible, see this link for optional reading.) 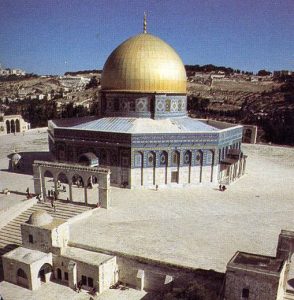 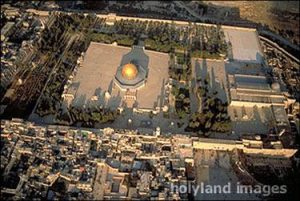 In 1 Kings 9:15, Solomon fortifies the walls of Megiddo, a hill fortress famous for overlooking the site of numerous historical battles. The main trade roads from Egypt to Mesopotamia ran beside Megiddo, and anyone who controlled the citadel controlled the roads, so this was a strategic location.

In the first recorded battle in history (1460 BC), Pharaoh Thutmose III commemorated his victory at Megiddo with an inscription and pictorial reliefs at the temple of Karnak in Egypt. There were many other battles preceding Megiddo, no doubt, but it was the first for which any account exists.

In the Bible, Joshua 12:21 and Judges 1:27 mention Megiddo as one of the Canaanite cities that were not conquered at first. By Solomon’s time, Israel ruled there. Later two Israelite kings died there, Ahaziah (2 Kings 9:27) and Josiah (2 Kings 23:29).

At the ruins of Megiddo today you can see an ancient Canaanite altar (circle of stones) and a tunnel which allowed the city to access water outside the walls in times of siege. The tunnel is 120 feet deep and over 200 feet long. 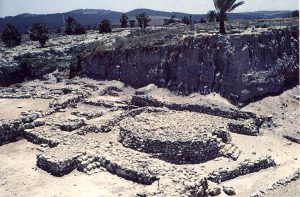 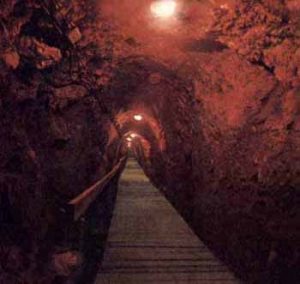 In Revelation, John refers to Megiddo by its Greek name Armageddon. Many people today assume this term refers to a final cosmic battle between God and the forces of evil, perhaps coming in the near future.

However, there is no “battle” at Armageddon. In Rev. 16:14-17, the enemies of God gather together at Armageddon, but then a great voice in heaven says, “It is done.” No battle occurs, since no opposition can defeat God. It’s over before it begins. This symbolic language does not refer to a literal battle at the end of the world.

The true key to reading Revelation is to ask how the original recipients of John’s letter would have understood it.

John wrote his letter to Christians in the last decade of the first century, specifically to seven churches in Asia Minor (modern-day Turkey). These churches were suffering persecution from the Roman empire and the Jewish community (Rev. 2:9-10). For John’s readers, the book served a two-fold purpose: to encourage those who were suffering persecution for their faith, and to emphasize the ultimate victory over evil that Christ had already won on the cross.

Those who interpret Revelation as a code book for the second coming of Christ overlook the book’s emphasis on the atoning work of Christ at his first coming. Describing events thousands of years in the future would have provided little comfort to John’s original audience in the midst of persecution. These early readers, however, would share the same hope that Christians of all times have in the victory over sin and death that Jesus’ blood provides. We do not look to the future for this ultimate achievement as it has already been accomplished and is securely ours. So we should more properly understand Armageddon to be a symbol John uses for God’s deliverance from evil at any time in history by means of the cross of Christ.

For some notes I’ve written on Revelation, see this link (optional reading).

Chapters 4-11 (optional reading) tell of the temple’s construction and dedication, and Solomon’s idolatry on account of his 700 wives from foreign lands. He also had 300 concubines (11:3). As noted in the last unit, most of these women were given in politically arranged marriages (1 Kings 3:1) and were not wives in the usual sense of the word. Solomon probably met very few of them (or else he would have had thousands of children).

After 40 years Solomon died. In the next unit we will see how the kingdom of Israel did not remain united after his death.

Back to Unit 3b