The Story of Israel

Introduction to the Study of Old Testament History

At the beginning of this course, there are many valid questions one could ask, such as, “What is the value of studying the Old Testament?” There are some people, even among Christians, who suggest such a study is not very important. After all, there is limited material concerning Jesus Christ, and they claim the Old Testament lacks relevance in today’s world.

The story of the Bible is not complete without both testaments. It is the great story of God the creator and His revelation of Himself to His creatures. The Bible is an over-arching story, containing many stories, but all having a common theme and a common objective. The Bible is a universal story for the purpose of bringing all humanity into a saved relationship with God. As we begin this study, it is important that we understand the purpose of this great story of redemption.

History is crucial for Christians to understand. Both Judaism and Christianity are religions which are based on historical events. God’s past actions are significant because they tell us of His purposes and plans. History has a purpose. There is a beginning and there will be an end, all governed by God.

God created humankind because of His desire to be in relationship with us. Genesis 1 states that men and women are created in His image and in His likeness. Humanity was created for the purpose of manifesting God’s image and character in creation.

However, Satan entered the picture with the intent to defeat God’s purposes. He convinced men that there was another reason to live that is even more fulfilling than God’s purposes – to live for self, according to our desires. Satan convinced and continues to convince us  to be our own gods rather than to serve God. At this point, the theme of the rest of the Bible, both Old and New Testaments was set: God inviting humanity back into right relationship with Him, which is the essence of abundant and meaningful life.

The story is still being told. We are a part of the continuing story of God interacting and reaching out to His creatures, calling us to be reconciled with Him, to live according to His purposes. We believe this is done in a special way through the life, teachings, and work of Jesus Christ. Nonetheless, the story of God’s people and His purposes for them begins not with the church, but with creation. This is our story, giving us a strong sense of who we are and why we live.

Studying the Old Testament should not focus on memorizing the order of the books or the chronology of the events. These may be important in helping us access and understand the books. But the real purpose of learning about Old Testament history is to give us a sense of God’s purposes for his creation. As different as the world might have been in Israel’s time, it has more to tell us about ourselves than you might imagine.

The same questions that faced ancient Israel are still relevant for us today. Are we living as God’s people, obedient to His will and fulfilling His purposes, or are we being shaped by the values of the culture around us? The Bible teaches that we are to be unique people, living as aliens in this world (1 Peter 2:9-12).

Seen in this light, the Old Testament presents a compelling story, a story of which we are a part. God continues to reach out to us, calling us to be His people. We have a lot to learn from our brothers and sisters of old. Too many times, we find it easy to condemn their failures, only to find that we too have failed God in similar ways.

What do you hope to gain from this course? You can treat it as a mere requirement to check off your list, and do as little as possible to pass the course. However, I challenge you to take advantage of this opportunity to learn more than you have ever known about the Old Testament. It is a fascinating and worthwhile study. I pray that you will take the time to read, to question, and to learn.

Six reasons to study the Old Testament
(adapted from www.ministryserver.com/dsmtext/ottext01.htm)

Jesus and the Old Testament

In Matt. 5:17-18 Jesus says he came not to abolish but to fulfill the law, which would not pass away.

Some Christians claim that the OT is no longer important for us today other than as a book of stories we tell our children about Noah’s ark or Daniel and the lion’s den. Some argue that if Jesus didn’t say anything about a topic found in the OT, then it’s not relevant. But Jesus respected the authority of the OT and upheld its teachings even when he didn’t repeat everything written there.

Certainly some things have changed from the OT times. Paul clearly states that some of the laws pertaining specifically to Jews do not apply to Gentiles, such as food restrictions or circumcision. We no longer sacrifice animals at a temple because Jesus was the supreme and final sacrifice for sin (Hebrews 10). Christians worship on Sunday rather than Saturday (by the way, the Bible never calls Sunday the Christian “Sabbath” or explains the reason for this change).

But we should not ignore the moral teachings of the OT and claim that they are no longer relevant in the Christian era. Jesus continued to teach from the OT scriptures as did Paul and the other NT writers. If we want to know the will of God, we cannot ignore the OT.

GENESIS AND THE OLD TESTAMENT WORLD

Three regions dominated the ancient middle east, making up what is called the Fertile Crescent. The land of Canaan lay along the east coast of the Mediterranean Sea, bordered by Egypt to the south and Mesopotamia to the east. 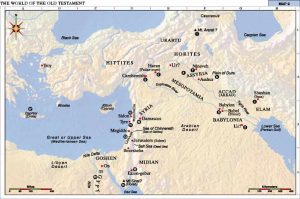 Before the people of Israel entered the land (sometime between 1400-1200 BC), Canaan was inhabited by several nations which we will discuss later in our study. Notice that the Jordan river runs through the land, with the Sea of Galilee to the north and the Dead Sea to the south. 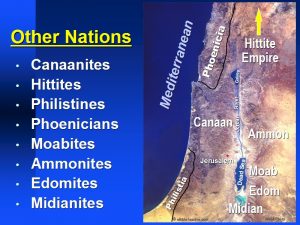 Egypt has a long and illustrious history. The Old Kingdom dates from 2700–2200 BC. During this time the great pyramids of Giza (near modern Cairo) were built as tombs for the pharaohs. The Middle Kingdom dates from 2000–1700 BC, and the New Kingdom from 1550–1100 BC. The Egypt described in the Bible mostly falls within the period of the New Kingdom. The pyramids were already 1000 years old when Moses was in Egypt. 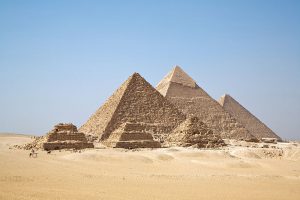 Mesopotamia is Greek for “land between the rivers,” referring to the main rivers of the Tigris and Euphrates. Today the countries of Iraq and Iran occupy most of this territory. In the ancient world several great civilizations ruled this region. The earliest were the Sumerians who invented writing called cuneiform, meaning wedge-shaped, around 3000 BC. Symbols were pressed into clay using a stylus. At first the symbols were crude pictures of objects or ideas. Over time, the pictorial representations became simplified and more abstract. Abraham originally lived in the land of Sumer.

Centuries later three major empires arose in Mesopotamia which would impact the history of Israel, Assyria with its capital Nineveh in the north, Babylon in the south, and Persia to the east. We will read about them when we study the books of the Kings.

The Old Testament consists of 39 books, written mostly in Hebrew over a period of one thousand years by many different authors, most of whom are unidentified. Jews and Christians consider these books to be inspired by God. The Old Testament tells the story of Israel from its beginnings, but more importantly, it serves as God’s revelation of Himself. We would not know about God, who exists beyond the physical world, unless He chose to reveal Himself to us. Throughout the Old Testament, we learn of God’s character by reading about His actions within human history.

The first five books are called the Pentateuch which means five scrolls. They are referred to as the books of Moses, although he probably did not write them in their entirety (for instance, Deuteronomy describes Moses’ death). More than likely, they were written by many inspired individuals and later collected to form a whole. Today the Jews refer to these books as the Torah, or law.

Genesis is a book of beginnings, giving an account of the creation of the world, the first man and woman, the first sin, the flood, and the birth of the nation of Israel starting with the journey to the promised land by the patriarch Abraham, his son Isaac, and his son Jacob. The story concludes with the sons of Jacob living in Egypt.

Exodus records the salvation of God’s people from the land of Egypt and their return to the land of Canaan, their original home.

Leviticus describes the rules for holy living and worship as directed by the priesthood. The book is named after the tribe of Levi.

Numbers tells of the Israelites’ wandering in the desert, often losing faith in God to provide.

Deuteronomy, which means “second law,” records Moses’ final speeches, giving instruction to the people before they enter the promised land.