An introduction and commentary with discussion of myths, links to classical sources, and influences in art and literature

Ovid’s influence on Western art and literature cannot be exaggerated. The Metamorphoses is our best classical source of 250 myths. “The poem is the most comprehensive, creative mythological work that has come down to us from antiquity” (Galinsky). Based on its influence, “European literature and art would be poorer for the loss of the Metamorphoses than for the loss of Homer” (Hadas). Ovid was one of the most popular Latin poets in his time; graffiti quoting him has been found on the walls of Pompeii. Ovid was a major inspiration for Dante, Chaucer, Shakespeare, and Milton (see bibliography on last page).

As one example of Ovid’s influence on Western art and literature, read the famous story of Daedalus and Icarus in Book 8. Ovid’s account is the earliest in extant literature (although the story is much older, found on 6th century Greek vases). Christopher Marlowe alludes to this story in his tragedy of Dr. Faustus (1592), comparing his protagonist’s ambition to that of Icarus:

Till swoll’n with cunning of a self conceit,
His waxen wings did mount above his reach
And melting, heavens conspired his overthrow. (prologue)

Now look at the painting below by Peter Brueghel, “Landscape with the Fall of Icarus” (1558). Notice how he takes details of ordinary life from Ovid’s language: the farmer at his plow, the shepherd leaning on his staff, the fisherman down by the water. However, in Brueghel’s version of the story, these men are oblivious to Icarus’ plight. (If you haven’t found him yet, look in the water in the lower right corner.) 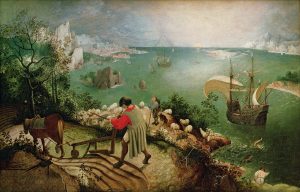 Why do you think Icarus’s tragedy is reduced to a minor detail in the painting? In “Musee des Beaux Arts” (1938), a poem inspired by this painting (which was inspired by Ovid), W. H. Auden explains:

About suffering they were never wrong,
The Old Masters: how well they understood
Its human position; how it takes place
While someone else is eating or opening a window or just walking dully along …
In Brueghel’s Icarus, for instance: how everything turns away
Quite leisurely from the disaster; the ploughman may
Have heard the splash, the forsaken cry,
But for him it was not an important failure. The sun shone
As it had to on the white legs disappearing into the green
Water; and the expensive delicate ship that must have seen
Something amazing, a boy falling out of the sky,
Had somewhere to get to and sailed calmly on.

His full name was Publius Ovidius Naso (43 BC – 18 AD). He was born one year after the assassination of Julius Caesar and lived into the beginning years of the empire under Augustus. Ovid seems to have believed in art for pleasure’s sake, having no ethical agenda for his writings, unlike his predecessor Virgil who wrote for the betterment of Romans. Ovid’s other works include Medea (a tragedy, no longer extant), Heroides (letters to legendary heroes from their wives; read them here), Amores (poetic essays on love), The Art of Love (advice on how to seduce a woman; scandalous in Augustus’ time, one possible reason for Ovid’s banishment in 8 AD), and the Fasti (a poetic calendar of religious festivals). Ovid offered something of an apology for his immoral reputation (Tristia 2:354): “My life is respectable, my Muse is full of jesting. A book is not evidence of one’s soul.” (for more biography)

In the first verses of the Metamorphoses, Ovid claims to write one continuous poem, not an anthology of myths. Unlike Homer’s Iliad, however, there is no central hero, thus no simple unity to the work as discussed in Aristotle’s Poetics. So what binds this poem together, making it more than a random collection of stories?

All of Ovid’s tales involve metamorphosis. But some stories (see Phaethon, Pentheus, Heracles) only have metamorphosis tacked on as an incidental element, almost as an afterthought.

The work shows general chronological progression, beginning with the story of creation and the flood and ending in Ovid’s own era with Augustus on the throne. However, chronology becomes unimportant in the vast middle section of  the work, as seen in the numerous anachronisms throughout (see notes on Callisto, Atlas, Cycnus stories for examples).

Metamorphoses and chronology provide only a superficial unity to the poem. A better way of viewing the artistic unity of the Metamorphoses considers Ovid’s use of “theme and variations.” For example, in Books 1-2 there are five variations (at least) of the virgin-pursued-by-god theme, each one altering the pattern in different ways:

This narrative technique of theme and variations gives Ovid numerous means to tell his stories in inventive ways, weaving a complex web of interrelationships throughout the entire work. This thesis, suggested by Brooks Otis (Ovid as an Epic Poet, 1970), will organize (with some modification) the discussion notes on the following pages.

Otis sees four major divisions (after a prologue depicting the creation and flood) to the Metamorphoses:

Each section prepares the reader for future sections. The tales of the Minyads (section II, book 4) foreshadow the thwarted or forbidden loves in section III. Hercules’ becoming a god (section III, book 9) points toward those later of Aeneas, Romulus, Caesar (section IV). Thus, throughout the work Ovid creates a complex web of interconnecting themes.

Throughout the notes are links to other ancient works of mythology, most of which were available to Ovid. Homer’s famous epics, the Iliad and the Odyssey were written sometime in the 8th century BC. Homer’s contemporary Hesiod wrote his Theogony about the birth of the gods around the same time. The Greek playwrights Aeschylus, Sophocles, and Euripides composed their tragedies during the 5th century BC. Virgil completed his Latin epic the Aeneid, patterned after Homer, about 19 BC, a generation before Ovid. The Library of Apollodorus was attributed to a writer in the 2nd century BC, but scholars believe the work was actually written more than a century later by an anonymous author; it may or may not have existed prior to the Metamorphoses. Hyginus wrote his Fabulae sometime in the 1st or 2nd centuries AD, after Ovid.