The following notes are not meant to be a summary, but are designed to accompany a reading of Ovid’s text, highlighting major themes or interesting details as background for understanding the myths. For more complete commentary, see the books in the bibliography on the final page.  The notes are organized according to the sections outlined in the introduction. Most quotes come from Rolfe Humphries’ translation (1955).

Here is a link to an on-line translation of the Metamorphoses by Tony Kline.

Ovid presents a philosophical rather than mythological creation account, avoiding the popular myth of Earth mating with Sky (as in Egyptian, Babylonian, and Greek myths). There is no personification of pre-existing chaos as a giant being or monster; here chaos is merely raw material from which the Demiurge (Plato’s name for the divine artisan) shapes the cosmos. This version was the more scientific view of Ovid’s day, promoted by the Stoics (in contrast, Epicureans didn’t even have a god behind creation, which resulted from a collision of atoms). This “god” remains nameless and is never mentioned again after the prologue.

From the beginning we see change and conflict as an inherent quality of nature, warring elements (earth, air, water, fire) in collision. The unnamed creator brings order to chaos. Compare this passage from Milton’s Paradise Lost (2.890f) which shows the influence of Ovid’s description:

Before their eyes in sudden view appear
The secrets of the hoary deep, a dark
Illimitable ocean without bound,
Without dimension, where length, breadth, and height,
And time and place are lost; where eldest Night
And Chaos, ancestors of Nature, hold
Eternal anarchy, amidst the noise
Of endless wars, and by confusion stand.
For hot, cold, moist, and dry, four champions fierce
Strive here for mastery, and to battle bring
Their embryon atoms.

By separating and delineating the elements, the god imposes rational design on unruly matter. However, this order does not remain fixed for long. As the multiple metamorphoses begin to occur in the story, change is once again the rule. Ovid soon abandons the Stoic philosophical view of a rational universe as he turns to the mythological world of conflict and disorder.

Ovid mentions in passing the defeat of of the Titan Saturn. In his Theogony  (8th century BC) Hesiod describes the war between the gods and the Titans in more detail. Kronos (Saturn) castrated his father Ouranos and became leader of the Titans (the Furies sprang from Ouranos’ blood). Fearing his children might rise up against him some day, Kronos swallowed each of them as their mother Rhea bore them. However, she substituted a stone for Zeus (Jupiter / Jove), and the young god grew up on Crete. Later he rescued his siblings from Kronos’ stomach, and they overthrew the Titans, sending most of them to Tartarus (similar to hell). Atlas was condemned to hold up the heavens (see book 4). 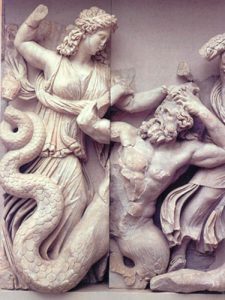 The idea of four ages goes back to Hesiod in the 8th century. It’s interesting that Jove does not appear on the scene until the Silver Age, suggesting that the gods are part of the problem, as there is strife even in heaven. (There is an allusion to contemporary strife as well: Julius Caesar had been assassinated one year before Ovid’s birth.) The Golden Age was eternal spring; the first thing Jove introduces is the change of seasons.

The fourth age of Iron brings about the creation of crime, greed, and violence. In contrast to the peace and harmony of the Golden Age, now gold becomes a temptation for war, and other vices. In Ovid’s Art of Love 2.277, he writes, “This is truly a golden age; many an honor is sold for gold, and gold procures love.” Hindu mythology also depicts four ages (yugas), each having one-fourth less righteousness (dharma) than the previous (see my notes on Hindu thought). “When change is the governing reality, an ideal time that corresponds to the apparent perfection of the created world cannot last: paradise is temporary” (Simpson 278).

Ovid briefly mentions the battle with the snake-footed giants, who fought to avenge the Titans’ downfall. The giants were the children of Gaia and Ouranos. Prophecy told that the gods could not defeat them without the help of a mortal. This task fell to Heracles. Neither Homer nor Hesiod record this event, but it is found in Apollodorus 1.6. Sculptures on the Altar of Pergamum depict this famous battle (Berlin Museum).

Ovid pays an indirect compliment to the Emperor in comparing Olympus to the Palatine hill, the imperial residence. However,  he soon paints a rather unflattering portrait of Jupiter, so is this comparison meant to be satirical, a subtle criticism of Augustus? Contrast the praise given to Augustus in Virgil’s Aeneid (book 6) where a “prophecy” tells of Augustus’ coming and a return to the Golden Age; also see Virgil’s 4th Eclogue which predicts the coming of a “son of god” (later adopted by Christians as a pagan prophecy of Jesus). Unlike Virgil’s admiring view, in Ovid’s work we are now living in the Iron Age, not the Golden, so what does this suggest about his evaluation of Augustus’ reign?

The first story of a human involves a sinner, punished for his offence against the gods. Lycaon’s case represents one example of the wickedness of all humanity in the Iron age. Lycaon (“wolf man” in Greek) is the reason for the flood, Jupiter explains, but not the origin of evil (Ovid doesn’t mention the famous story of Pandora’s box told by Hesiod).  Lycaon’s metamorphosis into a beast reveals his true nature; the description translates literally, “his mouth gathered savagery from the man himself.”

Determined to destroy the earth, Jove swears by the river Styx which runs through Hades. This oath binds all the gods, for in Hesiod’s Theogony 775 the punishment for breaking such an oath is severe: lying in a coma for a year, then nine more years of banishment from the company of the other deities. Later in the Metamorphoses Jove swears by Styx to Semele, and Phoebus swears to Phaethon; both learn to regret their rash promises.

The reaction of the other gods to Jove’s punishment of Lycaon resembles a senate of yes-men. At first it sounds as if the gods feel pity for humanity, but soon their selfish motives are revealed: without men they will lose their sacrifices. Jupiter claims that he wants to make the world safe for lesser divinities, nymphs, fauns, satyrs, but as we will soon see in the stories to follow, the biggest threat to pretty young nymphs are the amorous gods themselves.

The idea that the world will end by fire was a popular view among Stoics and is also found in 2 Peter 3:10. Note that if the fates so decree, even Jupiter cannot change it; Jupiter makes the same statement concerning the death of Caesar (Book 15). Fate is not so immutable in Homer; in Iliad 16.431 Zeus considers overturning Sarpedon’s fated death.

Many ancient cultures around the world have left records of a flood story, probably the earliest being the Gilgamesh Epic of ancient Babylonia (here for a comprehensive listing of flood stories). Note the imaginative language in the flood account: dolphins swimming in the forests, anchors plowing the fields. Pictures of predator and prey living peacefully together often indicate an idyllic world (Isaiah 11:6, Virgil’s 4th Eclogue), but here both wolf and lamb are swimming for their lives, united in the same terrible fate.

The cryptic oracle given to Deucalion and Pyrrha concerning their “mother’s bones” is typical of most oracles which came in the form of riddles. Humanity’s “stony” origin explains human endurance. Notice Ovid’s playfully mocking tone: “Who would believe it?” Unlike some ancient mythologists, Ovid never takes his stories too seriously. Deucalion is the son of Prometheus, who according to some sources created man from earth (Apollodorus 1.7). Pyrrha is the daughter of Epimetheus (Prometheus and Atlas’ brother) and Pandora who released all the evils into the world. Milton compares Adam and Eve to this couple (Paradise Lost 11.12).

Deucalion’s home, Mt. Parnassus, overlooks the sight which later became Delphi, the center for oracular prophecy in the ancient world. Ovid briefly provides the origin of the Pythian games at Delphi, in honor of Apollo killing the giant serpent/dragon.  The games, second only to the Olympic contests, were celebrated every four years from 586 BC to 394 AD. Notice how we “slide” easily from an account of creatures born after the flood to the Pythian legend to Apollo chasing after Daphne. Ovid enjoys these unpredictable transitions. 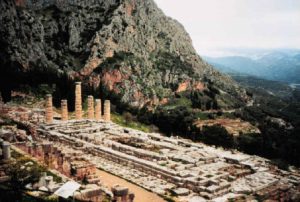 Ruins of Apollo’s temple at Delphi