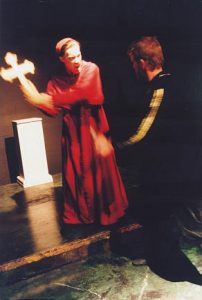 In our production the Cardinal in his desperate struggle with Bosola grabbed the crucifix as a weapon, a sacrilegious gesture symbolic of his perverted use of religious power.

After Bosola’s final words (the rest of the scene was cut), we staged a medieval dance of Death. The character of Death appeared again playing his flute, followed by the Duchess, Cariola, and Julia, who retrieved those who lay dead on the stage. They exited into a brilliant light as the living remained frozen in silent amazement.