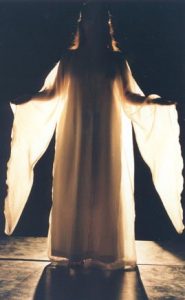 In book three of the Metamorphoses, Ovid depicts the love story of Narcissus and Echo, a young girl doomed to speak only through repeating another’s words.

In Renaissance drama, examples can be found in Ben Jonson’s Cynthia’s Revels, and Thomas Dekker’s Old Fortunatus, among others.