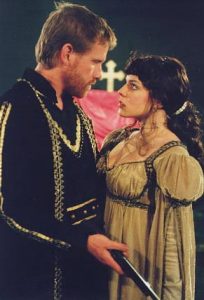 Feeling guilt over his sister’s death, which others interpret as melancholic depression, Ferdinand suffers from lycanthropia, the belief that he is turning into a wolf, a fitting symbol for his natural savagery. His appearance hasn’t changed because he believes the hair is on the inside. Webster takes his description of this condition from contemporary medical writings which associated the disease with witchcraft or demon possession. Some commentators also see an anti-Catholic allusion here as Protestant ministers of the time referred to Catholic clergy as wolves, using the verse from Matthew 7:15, “Watch out for false prophets. They come to you in sheep’s clothing but inwardly they are ferocious wolves.”

As mentioned before, the scenes with Julia are often cut in production, being criticized as extraneous to the plot. However, Julia provides an important comparison to the Duchess, both willful, independent women who initiate relationships with men and conduct secret affairs.  Her death, like the Duchess’, becomes another step on the way to Bosola’s conversion. In several productions the poisoned book which she kisses is a Bible, another perversion of the Cardinal’s faith.