Ferdinand fails in his attempt to break his sister’s spirit. In the face of death, she affirms her sense of dignity and self-worth, saying “I am Duchess of Malfi still,” which Alexander describes as “one expression of that continual declaration of human independence which proclaims the unique value of a particular human existence in the face of the inevitable triumph of death” (in Brian Morris, John Webster, 1970, 95).  She has attempted to fashion her own destiny in a world controlled by men, has lost her gambit, but remains to the end defiant and proud, high above the sordid world she leaves behind. Her vitality and lust for life in the midst of darkness and depravity cling to existence even after her strangulation. In many productions, her spirit lives on as the Duchess speaks for the Echo (5.3). Bosola, moved by her noble example, experiences a conversion of spirit as well, and becomes her champion in the finale of the play (more so than the ineffectual Antonio).

The discovery this late in the play that Ferdinand and the Duchess are twins is shocking; twins are usually considered to be especially close, and similar in nature. Ferdinand’s motivation, that he “had a hope, had she continu’d widow, to have gain’d an infinite mass of treasure upon her death,” is clearly rationalization, as the inheritance would naturally have gone to her son by her first husband. Ferdinand doesn’t want to admit the real reason for his intense jealousy of Antonio. One critic notes Ferdinand’s “desire to love his twin and to hate himself through her for that same love” (Charles R. Forker, Skull Beneath the Skin, 1986, 310). In 2.5 Ferdinand expresses this thought: “I could kill her now, / In you, or in myself; for I do think / It is some sin in us, heaven doth revenge / By her.” Later (5.2) he attacks his own shadow as if it were a form of his other self, an indication of his self-loathing. 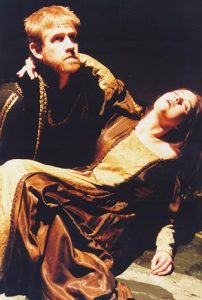 In many productions, the madmen’s lines are cut (having no bearing on the plot) and off-stage howling and gibbering are substituted.

In the 1971 Royal Shakespeare Company production the Duchess joined the madmen in their macabre dance, until she spies Bosola in the shadows.

In a 1982 production Bosola washed the Duchess’ face to prepare her for death.