This scene is a splendid study in dramatic and bold contrasts, the delightful love play of the opening giving way to the deadly and incestuous invasion of Ferdinand, disrupting their secret world. 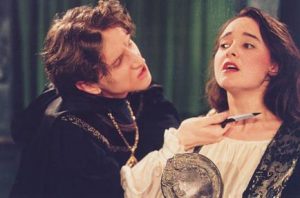 Unlike the first time they are alone (1.2) where the Duchess must awkwardly woo her own steward (a charming scene in itself), here the wedded lovers are completely at ease with each other, so comfortable in their relationship that they joke freely about private sexual matters in front of Cariola. Their teasing banter about who rules in the night is quite telling, as in the next few moments the Duchess takes charge of the situation, clearly demonstrating her superior strength of mind and action.

With his sudden entrance Ferdinand destroys this idyllic setting, and never again will the Duchess and Antonio enjoy each other’s company in peace. His earlier, subtle threat with his father’s dagger (1.2) now becomes overt, suggesting that she kill herself with it.

Even though Ferdinand wants to have power over his sister, sexual as well as fraternal, he seems hesitant to inflict harm on the Duchess’ body with his own hands (eventually she is murdered by strangulation rather than stabbing). His incestuous feelings lying just beneath the surface are apparent in this scene, although openly Ferdinand admits only a concern over the family reputation.

Notice how the Duchess’ strength of character shines through the darkness of this scene. In the face of death she is defiant and unrepentant: “whether I am doom’d to live or die, I can do both like a prince,” foreshadowing her most famous line in the next act, “I am Duchess of Malfi still.” (In a 1995 London production actress Anastasia Hille actually slapped Ferdinand, threatened him with his own dagger, then casually poured herself a drink.) Once the immediate threat is past, the Duchess takes the initiative in planning their escape, not Antonio whose bold words are seldom matched with action.

The final action provides another contrast between the Duchess’ attempt to create a cover story for their escape, which Bosola easily sees through, and Bosola’s superb acting as an accomplished liar who convinces the naive Duchess too quickly to offer him her confidence.