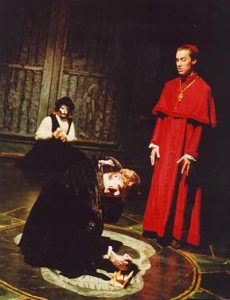 Ferdinand desires to control those around him. In 1.2 note his silencing the laughter of his courtiers unless he laughs first. In Act 4, before having her killed, he first tries to break his sister’s spirit by plaguing her with madmen, a severed hand, wax corpses. In this scene, he seems obsessed with imagining her sexual relations with other men, calling her mistress as if he were the betrayed lover. Most scholars see an incestuous motivation in Ferdinand that he may not even recognize in himself; note in 1.2 where he refuses to give Bosola a reason for why he forbids his sister to marry.

Ferdinand unleashes his passions like a destructive force of nature (notice the imagery of storms and fire), eventually leading him over the brink of sanity. In contrast, the Cardinal (who like the Duchess is known only by his title) appears to exhibit cool reason in his machiavellian dealings. He hides his motives, staying behind the scenes. He chides the Duke for his lack of self-control, but he uses reason not for any higher moral purpose but to further his power in affairs of state. Webster manifests the typical Puritan concern that the alliance of church and state doesn’t insure holy order but instead opens the way to tyranny and depravity.

“The anonymity of the Cardinal confers a shadowy remoteness upon him … emerging as the most powerful but least knowable of the major figures” (Charles Forker, Skull beneath the Skin, 312). Compared to Ferdinand, the Cardinal appears emotionally hollow, his mastery of passion a deficiency of feeling. Forker describes the Cardinal’s affair with Julia as “a cynical and tedious experiment in physical gratification, devoid of passion and even pleasure” (315).

Following classical and medieval ideas, Renaissance scholars explained human behavior (what we would today call psychology) by the theory of humours, four bodily fluids (blood, phlegm, choler, and black bile) whose relative proportions in the body were thought to determine a person’s disposition and general health. An excess of one of the humours would cause an imbalance in the system and aberrant behavior. Possibly Webster intended to reflect this theory in the composition of his main characters:

In our university production (pictured above), the figure of Death observed the scene from the side, and at the brothers’ exit, he crossed the stage playing a funereal tune, and sat in the Cardinal’s throne-like chair. The reign of Death had now begun.