In this scene we learn more about the three siblings, but attention focuses on the character of the Duchess in the second half (note that this fascinating individual is never called by name).

Antonio describes the outward hypocrisy of both Ferdinand and the Cardinal (who like his sister is known only by his title). About the Cardinal he says, “Some such flashes superficially hang on him, for form; But observe his inward character.” As for Ferdinand, “What appears in him mirth is merely outside.” 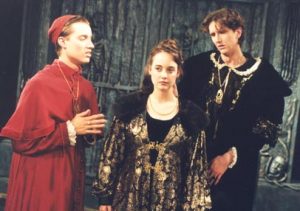 Ferdinand apparently enjoys playing a public role, abusing the power of the court (“He speaks with others’ tongues, and hears men’s suits / With others’ ears; will seem to sleep o’ th’ bench / Only to entrap offenders in their answers”) whereas the Cardinal prefers to stay behind the scenes, employing intelligencers (spies) and bribery to accomplish his dirty work. Both brothers are frequently compared to the devil.

Notice the difference in their attitudes toward their sister’s remarriage. The Cardinal allows for the possibility if she maintains the family honor; Ferdinand, however, will not hear of any union, describing his sister as a lustful whore. His objection seems to come from a more-than-fraternal affection (see further comments in 2.5).

In standing up to her overbearing brothers and in her delightful seduction of Antonio, the Duchess demonstrates her most attractive character traits: strong, passionate, sensual, courageous, independent, intelligent, witty, cunning, ambitious. “In temperament she is a heroine of Shakespeare’s romantic comedy” (Robert Ornstein, The Moral Vision of Jacobean Tragedy 147). These qualities, which most of today’s audience would find admirable, were potentially threatening to a male-dominated society. 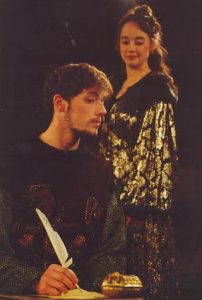 Webster’s primary source for his story (mostly true to history), William Painter’s Palace of Pleasure (1567), shows less sympathy for the Duchess, taking a strict, moralistic tone, condemning her for being too lustful and for breaking the accepted rules of her social status. Was she guilty according to Renaissance standards of conduct? In Webster’s own time, King James had his cousin Lady Arbella imprisoned for marrying beneath her status against his wishes. However, by placing the negative views of women in the mouths of villains (Ferdinand referring to her as “lusty widow”) and malcontents (Bosola’s discussion with the old woman in Act 2), Webster prompts his audience to question these typical views of women and directs more sympathy toward the Duchess and her right to remarry.

A modern audience’s admiration of her may stem from other values just beginning to be explored in Renaissance thought. From a modern perspective she plays the role of existential hero: going into an unknown wilderness with assurance only in herself. Later in the face of death, she affirms, “I am Duchess of Malfi still” (4.2), “one expression of that continual declaration of human independence which proclaims the unique value of a particular human existence in the face of the inevitable triumph of death” (Alexander in Morris, 95). She finds herself a woman lost in a corrupt world of men, having no female equals, a free spirit in a world of stifling restrictions.

In Skull beneath the Skin, Forker remarks, “Since the facts of the Duchess’s story cast her so prominently in the role of sufferer and victim, it was important to devise a means for avoiding the impression of abject helplessness and passivity … Webster had to suggest uptapped reserves of stamina in the character. … The tragic journey on which she embarks is largely solitary in both the physical and spiritual senses, and ironically this is true despite her romantic motivation. Her husband cannot protect her nor even be at her side in the crisis–a crisis that Webster dramatizes as a wrenching ordeal of self-discovery” (319).

Webster created in the Duchess what Shakespeare never did, a tragic female protagonist (Juliet doesn’t act on her own, Cleopatra shares the world stage with Antony) who represents a challenge to social hierarchy and “natural” order:

“An increased interest in female protagonists in drama of the Jacobean era can be correlated with nostalgia for the reign of Elizabeth I and values she had posthumously come to represent” (Leah Marcus, ed. Duchess of Malfi, 2009, 11).

In the play’s original production at the Globe and the Blackfriars, the part of Ferdinand was played by Richard Burbage, the principal actor of the King’s Men who also first played the roles of Hamlet, Othello, Richard III, and King Lear. 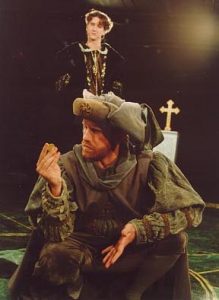