John Webster lived from 1578 to 1634 (although these dates are somewhat uncertain). Besides this play written in 1613, he wrote another tragedy, The White Devil (1612), and a tragicomedy, The Devil’s Law Case (1619), and collaborated with other writers such as Thomas Dekker and Thomas Middleton on about ten more plays (a common practice of the time).

The story is based on history, taken from William Painter’s The Palace of Pleasure (1567), a collection of cautionary tales about powerful people who act unwisely according to their passions. Painter adapted and translated the French work of Belleforest, Histoires Tragiques (1565) who took the story of the Duchess from a novella written by a friend of Antonio about a year after his death.

Giovanna d’Aragona, the historical Duchess of Amalfi, lived from 1478 to 1511. She married her first husband the duke when she was 12 and was widowed by age 20 while pregnant with their son. In 1510 the revelation of her secret marriage a few years earlier to Antonio da Bologna sparked a scandal throughout Italy. Trying to escape to Loreto, she and her children were captured, imprisoned and never heard from again. Antonio was murdered in Milan by Daniel da Bozzolo in 1513.

In Painter’s version the Duchess comes off as a lust-driven seductress willing to break all rules of decency and abandon her official duties as ruler and mother of her first husband’s child. In contrast, Webster presents her story as an unjust tragedy; her desire for a loving relationship in the bonds of marriage is quite natural, her brothers’ prohibition unnatural. Webster transfers the monstrous lust of which Painter accuses her onto her brothers, with the Cardinal’s affair with Julia (historically accurate) and the suggestion of Ferdinand’s incestuous desire for his sister (invented by Webster).

Webster created the character of Bosola from several different men in his sources, including an historical Daniel da Bozzolo who murdered Antonio. Combining various roles in the story has made Bosola a complex and sometimes contradictory character.

In the opening scene, Bosola appears as the malcontent, a typical Renaissance figure (compare Richard III, or Iago), an anti-hero with a bitter, sarcastic, dark view of life. Ironically he also becomes the chief spokesman in the play, demanding the audience’s attention and, to some degree, understanding.

Antonio’s first description of Bosola as “court gall” is somewhat modified by his admission that he is “very valiant” and that his melancholic moods have poisoned “all his goodness.” Fredson Bowers called him “a misfit, a man of worthier talents forced into a degrading position, and with a brutal philosophy making the most of it … If he must play the villain, then he has decided to be an efficient one.” (Elizabethan Revenge Tragedy, 1940)

Bosola thinks of himself as a realist, self-aware with an honest assessment of his nature and condition, but actually he proves to be more of a disillusioned idealist. He realizes that in an evil age, doing good often goes unrewarded, but he still believes there should be honor among thieves at least. Even though he plays the faithful henchmen in murdering for the brothers, neither of them shows any gratitude. During the course of the play Bosola and the Duchess are pitted against these powerful forces; as they strive for independence of action, they become more self-aware by suffering.

In Act 3, scene iii Delio describes Bosola as a pretentious scholar of classical learning, but other than this reference nothing else is made of this characteristic.

Antonio is noble in character, if not by birth, but appears weak in contrast to Bosola, the Duchess, and her brothers. In the course of the play he will initiate only one action, pursuing a truce with the Cardinal  (5.1), a foolhardy plan which ends in disaster.

Antonio’s opening comments about the virtues of the French court set up a contrast with that of the rulers in Italy. Many political tragedies during this period were set in countries other than England, where “the corruption of the times” could be criticized without fear of the public censor. 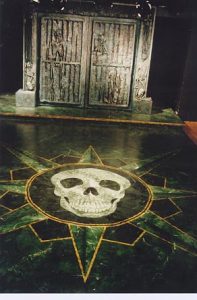 In our 1998 university production, we designed a set of large doors which we called the Gates of Hell, reminiscent of Rodin’s great work in Paris.

In contrast to the horror that follows, the opening scene was staged as a masquerade party with games and much laughter (based on the reference in the next scene of the Duchess’ expensive entertaining or “chargeable revels”). We wanted to establish an environment of light before the darkness invades, an innocent world before the entrance of the serpent.  The festivities were abruptly interrupted by the Cardinal, solemnly entering and kneeling to pray. One of the masked entertainers was dressed as Death who appears at key points in the play later.

In contrast, the 1985 National Theater production (with Ian McKellan as Bosola) started with the funeral procession of the Duchess’ first husband.

Bob Hoskins as Bosola (1980) seemed irritated by the presence of Antonio and Delio, but pursued them with further grievances when they tried to walk away.